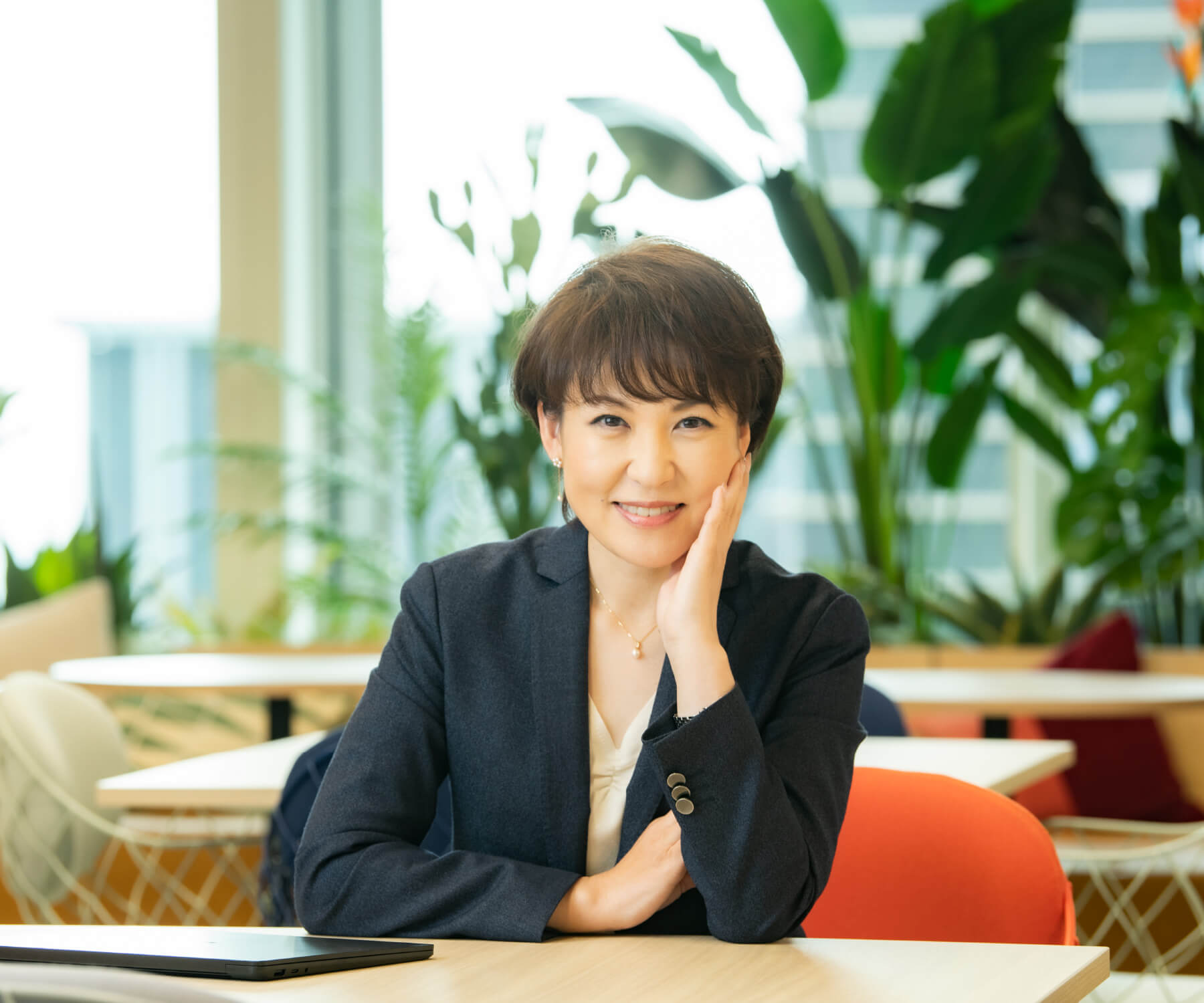 She was born into the second baby boom generation, and from childhood focused on her studies, sparing no time to play. However, after graduating from university in the late 1990s, the Japanese economy was in an unprecedented recession, and the concept of “diversity” was not even a thought. It was extremely difficult to find a job, simply because of her gender. In spite of this, she joined a foreign IT company as a sales assistant, and persevered alone in the male-dominated Japanese business world. She eventually rose to become a board member. After working for various companies in Japan and abroad, she joined JIG-SAW in 2020. Currently, she is in charge of several corporate departments.

Instead of trying to adapt to change, why not create it?

I want to be on the side that innovates, the side the creates new eras.

As soon as I entered university, the Japanese economy’s bubble burst and we fell into an unprecedented recession. Pretty much every Japanese company cut back on hiring, and many of us who graduated from four-year universities, especially women, found themselves with very few job opportunities. I was one of those women. This was probably the first big setbacks I had ever experienced, as I had been prioritizing my studies since I was a child, thinking that if I could get into a good university I could get a good job. The reality was that I couldn't find a job at a Japanese company, so I started my career as an employee at a foreign IT company. After that, I took advantage of that company's career-change system, and switched my role to sales. There, I was able to gain experience from sales representatives, section managers, general managers, business managers, and executives in charge of different departments. Until now, I have worked at companies of various sizes and stages, both domestic and international, including major foreign IT companies, Japanese listed companies, and start-ups. When I was thinking about my future and how I could further my career, I had an opportunity to meet the CEO of JIG-SAW, Mr. Yamakawa. When I came across JIG-SAW I realized that I had quite a limited perspective, and that if I had the choice, I wanted to be on the side of innovation and pathfinding, not being chased by change. Until I met JIG-SAW, all I could think about was how to do my best in my given environment. Now I know that it's way more interesting to forget the preconceived notions that have been ingrained in me throughout my working experience when taking on new challenges.

With a team that accepts and respects each other, any future is possible.

JIG-SAW is a company that has the power to change the world, but it also has a soft warmth to it. There are many factors that make a business successful and work interesting, such as vision, strategy, product superiority, technology, and sales ability, but I believe that the most important factor is people. The people you work with are like your buddies on a climb, holding your rope as you head for the peak of a tall mountain. If we don't understand, trust, and respect each other, nothing goes right. It’s also important to understand and respect that there are colleagues who have different values and ideas from yours. In this respect, JIG-SAW has a fantastic community where we work together with each other while maximizing our individual abilities. We respect each other while engaging in friendly competition, and we are considerate and warm towards each other. We come together and think straightforwardly, "What is the best thing for our clients and society?” I know that if we maintain this environment, there is no future that is impossible to achieve.

Currently the world’s markets are changing dramatically, driven by the evolution of technology. Automobiles, distribution, space, real estate, human resources, content, etc. IT companies are entering and dominating every industry. Many existing companies are forced to make a choice to survive by "living with the changes". The times are certainly changing now. When I started my career, the business world in Japan was a male-dominated society to a now-unbelievable degree. Even so, I think I overcame my frustrations one by one by facing the task at hand with sincerity and by not blaming others. Nowadays, we live in an age where gender is much less of an issue. As individuals, we need to have a strong sense of ownership and responsibility, and we need to "always exceed expectations" rather than "meet expectations.” It is a fact that speed, efficiency, and what may seem like a detour or a waste of time are often the things that are truly important. But at JIG-SAW, we are challenged with tasks that require diverse skills and abilities, in an exciting environment that allows us to go beyond the walls of our own minds. I look forward to meeting everyone who is interested in experiencing that with me.