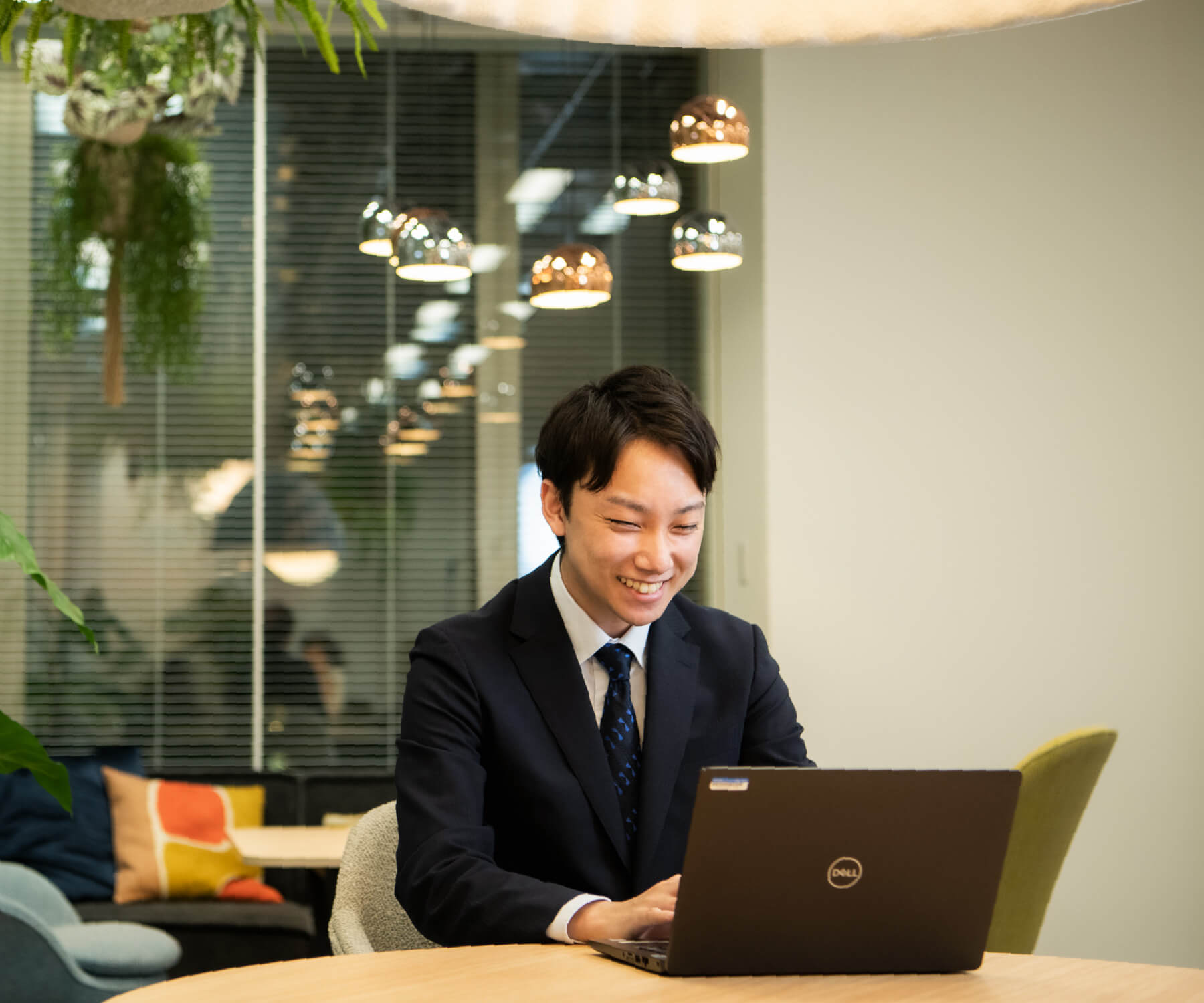 Chose JIG-SAW based on the criteria of "being able to grow at a fast pace" and "being evaluated fairly, regardless of employee seniority." Currently, he’s responsible for sales operations focusing on OPS, JIG-SAW’s cloud operation service. Through his work every day, he grows and absorbs knowledge about different cutting-edge technology. When he was a student, he was a member of an a cappella club, and has performed in live events at venues such as ZEPP Tokyo. He also enjoys pancakes.

Becoming more than I ever thought I could,
at the cutting edge of the ever-changing world.

It’s more interesting to jump into an unknown world,
rather than into a world where everything already has an answer.

In university, I was an economics major. When I first started job hunting, I really wanted to work for a big company. Like my undergraduate friends and seniors, I took a look at some megabanks and securities firms, but one day I suddenly stopped and questioned myself. “Would I be able to work at a massive company, and feel like my own personal work has value?” I found myself thinking, "I want create my own results, not be a cog in a big wheel.” From that moment, I made a 180-degree turn toward smaller-sized companies. When I found and looked into JIG-SAW, I started to get an impression that no other company gave me. It’s a venture company that’s refining cutting-edge technologies such as IoT and visual reproduction through the Internet of Abilities (IoA), and it’s also a publicly-listed company with the best track record for the services they provide. I was attracted by the unique combination of a small company's environment where individuals can thrive, and a publicly-listed company's solid foundation. As an economics major, IT was a completely new world for me, and at first I had no idea what was going on. However, I started to become more and more interested in it, and I quickly learned by putting things into practice. It’s definitely more interesting to jump into an unknown world than into a world where everything already has an answer. I feel like at JIG-SAW, I can grow into something that’s not even possible for the current me to imagine.

Growing faster than everyone else,
learning the world's leading technology.

As a sales representative, I showcase monitoring and operation services for IT environments (cloud and servers) and security enhancement services to customers in various industries. Today, IT is an important part of every company’s infrastructure. One of our missions is to protect the critical infrastructure of our clients from risks, such as server downtime and unauthorized access. What is interesting about working at JIG-SAW is that we support all types of IT environments, so we are constantly exposed to new information and knowledge when selling our services. There are many, many different ways to protect IT environments, and new technology is created every day. JIG-SAW's services are also evolving on a daily basis. This means we need to continually keep our knowledge up to date, and keep learning new things. That's what's exciting for me, because I like learning about new things and the unknown. The world of technology is exciting! There’s always new innovation happening somewhere, and you can keep up with the cutting edge tech of the ever-changing world while improving yourself and satisfying your intellectual curiosity.

We’re in position to be the first to experience the world’s evolution.

As technology changes and evolves, our social environment is also constantly changing. For example, in recent years, all kinds of companies have been promoting the DX (Digital Transformation). As a result, there is a growing need to build cloud environments, especially for the increase in remote work. Many of these companies contact JIG-SAW for consultation on this. As our mission is to support IT infrastructure and provide peace of mind through technology, we will continue to absorb the evolution of technology to meet and anticipate the needs of the changing times and ever-changing world. In order to do this, we need to absorb new, effective technology faster than other companies, create our own technology, and at the same time be sensitive to the changes of the times and society to stay one step ahead. Of course, it’s difficult to predict exactly what kind of technology will be created and popular in the future, and what kind of society the world will become. But that's what makes it so interesting! As JIG-SAW continues to run at the forefront, we will be the first to experience the evolution of the world. We will be able to grow faster than anyone else. That's what I think.